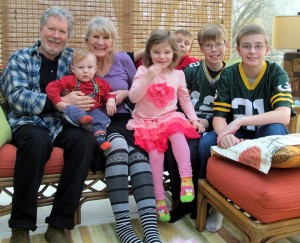 It’s a white Christmas morning on my little cul-de-sac behind the Cheddar Curtain, thanks to a blizzard five days ago that registered as the second-highest 24-hour snowdump in Madison history.  I’m flushing out the cobwebs with coffee after attending an old-fashioned midnight service with all the celebratory trimmings with my neighbors at their cathedral-like church.  Soon I’ll be on my way to perform my Holiday Sing-Along at a Madison Senior Center luncheon, the show that traditionally wraps up my Yuletide concert season.  After four seasons I can now do it in my sleep– which today is most fortunate.  Thanks to Mother Nature—or more accurately the Ice Queen that rules my realm—my last gig this year will be tomorrow, rescheduled from Thursday’s snow day.

We sang “Silent Night” last evening my favorite way, by the tiny lights of hand-held candles.  And while all is calm this morning, I’m not feeling that it’s very bright.  This holiday season is tempered by the horrible tragedy in Newtown.  Any shooting death is one too many, but these defenseless children could have been our grandkids—or yours.  All told, 88 people died in 16 U.S. mass shootings this year.  And that doesn’t begin to approach the 34 Americans murdered each day through gun violence, a rate that if unchecked will total almost 50,000 during President Obama’s second term.

My wife and I both grew up in responsible hunting families, but assault weapons are for people who stalk human beings en masse.  No private citizen should own one, let alone be able to purchase unlimited quantities with no background checks through gun dealers who exploit gaping legal loopholes.  This isn’t about politics; it’s about our lives.  I hope you’ll stand up wherever you are, and do whatever you can to end this insanity.

With that, I wish you peace and squeaky curds!