No Fooling: I’ve Launched a Dog Book on Kickstarter! 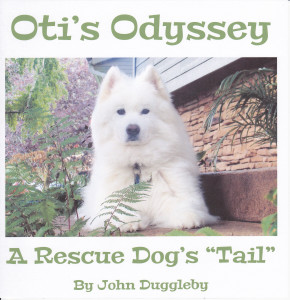 Today may be April Fool’s Day, but I kid you not: I just launched a Kickstarter campaign to fund my new book, Oti’s Odyssey: A Rescue Dog’s “Tail.”   Otis along with his littermates and parents was abused neglected and left for dead—then dramatically rescued, fostered and adopted to my family to become a therapy dog, Lands End catalog model, movie star, parade attraction, and in general fluffy goodwill ambassador for almost 14 years.  Oti’s Odyssey is his own “first pooch” account of his dramatic rescue, recovery and years as a poster pup for animal rescue.  It’s written as a children’s book, but is a tribute to dogs and their humans—especially rescuers– everywhere.

After publishing eight children’s books through the traditional route, I’m going do-it-yourself for the first time via Kickstarter.  For the uninitiated, it’s a site for funding of worthy independent creative projects, and you can find mine via this link:

If you agree that “Dog” is “God” spelled backwards, I hope you’ll check out my Kickstarter campaign to help Oti’s legacy bark on!   And if you know of any other dog lovers who might be interested in this book, please spread the word!