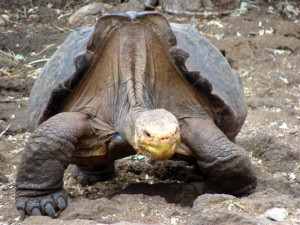 My wife Jude and I just returned from a 19-day odyssey to Ecuador including the Galapagos Islands (as they’re known, though technically speaking, they’re an archipelago).  No words– even mine– can do justice to the jaw-dropping array of creatures we saw– as often as not, within arm’s length.  It is a Herculean (Darwinian?) task even to select representative photos from the hundreds I snapped. 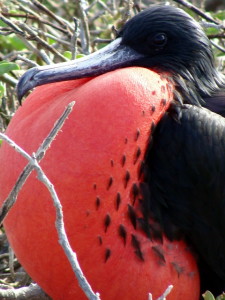 To visit the Galapagos is to see our planet in near-perfect natural balance, the way it was before we glorified apes gained control.  It’s not always bucolic; Galapagos emerged from volcanoes that could still blow their tops at any time.  And “survival of the fittest” includes not ending up as someone else’s supper.  But everything within nature happens for a good reason– in stark contrast to many of our manmade edicts-  and every species including homo sapiens benefits.

We explored the Galapagos on an eight-day boat tour with 16 other passengers holding passports from not just the U.S., but Canada, Australia, the United Kingdom and Switzerland.  Our version of the “Gilligan’s Island” castaways included a career 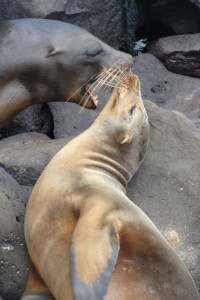 ambassador, international law expert, child psychologist and lots of past and present educators.  Despite our diverse pedigrees, we were remarkably on the same page about global social issues, especially environmental ones.  We decided that if we got together and ran the world, we could fix things pretty quickly.  Unfortunately, none of us has the stomach to enter politics.