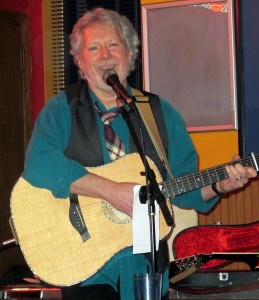 … At least today.  I’m actually part Scottish, but I’ve developed a Guinness-strength musical connection to the Emerald Isle.  St. Paddy’s is one of my two biggest performing seasons (the other is Christmas), and this year I’m in the midst of morphing into Paddy O’Chair for a record 10 performances.  It’s a marathon of toe tapping, joke cracking and pounding non-alcoholic green beer (at least till I’m done playing).

As with all my shows, I usually try to sneak in some songs I’ve written myself.  One that always makes the setlist this time of year is “Everybody’s Irish,” a reminiscence on celebrating St. Pat’s during my 12 years as a Chicagoan.  From the green-dyed Chicago River to the 3-4 hour parade through the Loop, nobody does Paddy’s better than Da Windy City.  What I liked best, though, was the way everybody became “Irish” (by mayoral proclamation), and folks of all nationalities and races partied together and generally got along, which is much more than can be said for your typical day in Chicago.

I haven’t recorded it, but submitted for your approval are the lyrics.  Erin go Bragh!

When the snow melts away in old Chicago

And gather where the river’s flowin’ green

Once a year, it don’t matter where you come from

The parade is stepping off, it’s time to play

So pour a glass dram of Irish wiskey for Mitzi

For Chang and Juan a frothy Guinness head

Some cabbage and corned beef for every native chief

Some mussels from the bay for Desiree’

Let every race and nation smile, we’re sailing to the Emerald Isle

Lucky day, once a year in old Chicago

In every neighborhood you’ll find a friend

To gobble Irish stew, hoist green beer with you

And wonder why the party has to end

Saints alive, how we thrive when we’re together

Begorrah, end the war, it’s not the way

It’s lots more fun to get along, so raise your glass and join the song