Better Late Than Never– The Album 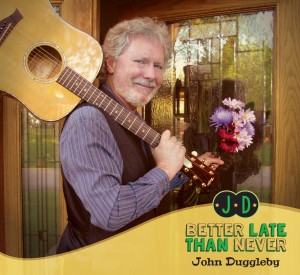 My performing career began at age five when I crooned “You Must Have Been a Beautiful Baby” for a nickel in an Iowa supper club.  But  what really spun my compass was The Beatles’ American invasion shortly after I turned 12.  I dreamed of writing songs for an album (in those vinyl days) of my own.

Dreams can come true; sometimes they just take awhile.  Fifty years and a load of living later, submitted for your approval is the appropriately named Better Late Than Never, my first album.  It contains 11 original songs plus an old Celtic ballad I used to propose to my wife Jude many years ago.

I owe this occasion to so many who have loved and lifted me along the way, and to them I dedicate this album.  The shortlist includes the Great Spirit, the lovely Jude, my parents and late grandparents, 13-year companion Otis (Samoyed of Destiny) and all the precious friends— musical and otherwise—  who have hung with me over the years.  And I’m eternally grateful to the village of hyper-talented and uber-patient musical folks who helped put a village idiot like me on record.

I’m revamping my web site to include cuts from the new album, but for now you can hear it on https://soundcloud.com/duggleby  I also need to set up for online purchase, but in the meantime e-mail me@johnduggleby.com if you’re interested and I’ll press one into your mitts.