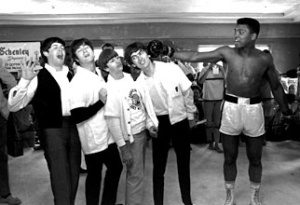 It’s hard to find appropriate words to describe Muhammad Ali.  Along with the Beatles he was the “Fab Five” of most important people to me during my Wonder Years, besides my parents and grandparents.  Not since John Lennon’s assassination in 1980 have I been so saddened by a celebrity passing.

I can’t say I was a huge boxing fan, but Ali transcended sport and about everything else in the 1960s.  As a teenager developing my own social conscience during those turbulent times, Ali’s refusal to serve in Vietnam– at the expense of three years at his boxing peak– gave countless young people like me the strength to stand by our convictions in the face of “establishment” policy.  His razor-sharp commentary, once famously aimed as hilarious insults toward his early opponents, distilled sentiments of those outside of power when he observed, “I ain’t got no quarrel with no Viet Cong.  No Viet Cong ever called me a nigger.”

We all know how he came back to become “The Greatest of All Time,” then faced a more formidable foe for more than three decades as Parkinson’s ravaged his body.  Besides all the legendary moments, I’ve enjoyed hearing “regular” peoples’ accounts of how Ali touched them in some way.  Many years ago when I wrote a magazine article on a pilgrimage to Graceland, one of the estate’s administrators told me that of all the famous people who visited the Elvis shrine, Ali impressed her the most.  Instead of being ushered straight in like other celebrities, Ali said, “I can wait in line like everyone else.”  For a couple hours he queued up with the masses, probably a more vivid memory than whatever they saw in the mansion.

One of his later quotes is among the most meaningful to me: “Now the things that once were so effortless – my strong voice and the quickness of my movements – are more difficult. But I get up every day and try to live life to the fullest because each day is a gift from God.”  Those final words are on my 86-year-old Mom’s fridge magnet, and keep her in the ring for another round.