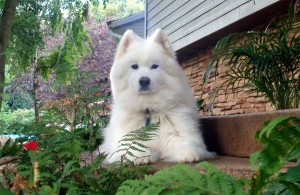 If you’ve ever loved a pet, you know that someday, through no fault of their own, they will break your heart.  Our beloved Otis did exactly that this week when, just short of fourteen, his own joyous ticker was silenced.

As some of you know, “Oti’s” saga was the stuff of Jack London novels—and indeed someday I plan to write it.  It began when some geniuses in Kentucky bred his father and underage mother, expecting to establish a “puppy mill” for purebred Samoyeds. When they couldn’t sell the pups, the couple began to neglect, then abuse them.  As the “alpha” who tried to protect his four siblings, Otis received the brunt of the mistreatment. After four months the would-be breeders got tired of feeding them, and dumped pups and parents at the door of a local humane society.

By then Otis and most of his brethren had acquired pneumonia, conjunctivitis and virtually every worm and insect pest a dog can attract.  They were scheduled for euthanization until Northern Illinois Samoyed Assistance (NISA), a Chicago area rescue group, learned of their plight.  NISA scooped up the motley crew now dubbed the “Kentucky Five”, and pulled them back from the brink with care from volunteer veterinarians.  Otis also needed several months with saint-like foster “parents” to convince the wary pup to give humans another chance.  We adopted him as a loveable, albeit rambunctious one-year-old.

As a Cheesehead, his short-form resume included:

–         NISA’s first alum to achieve American Kennel Club Canine Good Citizen Certification.  This enabled wife Jude, daughter Katie and I to take him to a local nursing home as a therapy dog, where he both spread smiles and soothed several animal lovers in their dying hours.  He also had a very short musical career  accompanying me to senior facility concerts.  I fired him for barking non-stop whenever the audience applauded—he no doubt assumed it was for him.

–         Model for three Lands End catalogs.  One is a charming shot of Otis “giving paw” to a lovely woman, enabled by the hot dog concealed in her hand.

–         Featured attraction (in costumes created by Jude) in two Madison St. Pat’s Parades (as O’tis the Leprechaun) and an Independence Day Parade in Columbus (as Uncle Sammie) in which I was “Yankee Doodle Duggleby,” a marching minstrel.  He reprised the latter identity to win—at age twelve– the inaugural costume contest at NISA’s annual Sam-O-Rama reunion picnic.

–         Appearances in several NISA annual calendars, including one two-page spread on his beginnings and subsequent life with us.  The accompanying photo of our boy– still regal at age 10 ½– appeared on the cover of NISA’s 2014 calendar.

–         Star of an “underground” film made by a friend of mine—at least he got the biggest ovation at the screening party.

Though Otis accomplished more in his lifetime than most people do, his greatest attribute by far was his boundless joy and appetite for life.  Each new day was an adventure and any new person or critter absolutely had to be his friend and fan, or face relentless pursuit until they caved.  Fortunately very few creatures of any type could resist him.  One person likened him to the smart but naughty school kid who gets by with his antics because the teacher can’t resist his charm.  I’m certain that’s how our party animal passed his Canine Good Citizen test.

Since I work from home, Otis was my constant companion– and along with Jude, my best friend.  Though his body finally weakened at the end, his heart and spirit were as strong as ever; he was licking my hand just before slipping into his final sleep.  I can’t tell you how much I miss him, and how blessed I feel to be part of his amazing journey.  Please give a pet or human (or both) that you love a big hug for Otis; he’ll be flashing that million-dollar “Sammie smile” from somewhere.