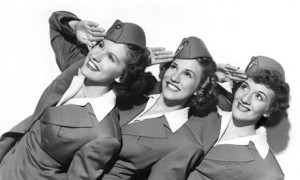 One of the giants of recorded music, Patty Andrews, passed this week.  “Who is Patty Andrews?” you might ask if you’re anywhere younger than my parents.

Patty was the lead singer and last surviving member of the Andrews Sisters, a trio of youngsters who blew out of Minneapolis like a hurricane and dominated the pop charts as favorites of the Greatest Generation during the late 30s and 40s.  They became the best selling female vocal group of all time (sorry, Supremes), and were outsold during the World War II era only by Bing Crosby.  In fact, Bing, Patty and her sisters LaVerne and Maxine sang together several times during the war years on such hits as “Don’t Fence Me In” and “Pistol Packin’ Mama.”

They also tirelessly entertained hundreds of thousands of soldiers, and lent their voices to campaigns for War Bonds.  At many concerts, a lottery for three lucky winners of a dinner date with the Andrew Sisters had GIs crossing their fingers.  They made  combat hardened veterans sing, laugh and occasionally weep to sentimental reminders of home such as, “I’ll Be With You in Apple Blossom Time.”

I grew up listening to my Mom sing—and jitterbug—to songs like “Don’t Sit Under the Apple Tree”, but I filed the Andrews Sisters and other music from their era in the sonic dustbin the first time I heard this little band from Liverpool called the Beatles.  Then, shortly after the Fab Four imploded, a newcomer named Bette Midler burst on the scene and hit Number 1 with an imitation of “Boogie Woogie Bugle Boy,” which the Minneapolis girls flung up the pop chart 30 years earlier.  In the grip of a nostalgic seizure, I bought a double album of Andrews Sisters hits, and have been a fool for them ever since.

I include a medley of some of their classics in a 1940s musical revue called, “Sentimental Journey,” which I perform largely for seniors.  I’ve always told audiences that Patty is still alive, and encouraged them to sing along loud enough that she can hear us where she now lives in California.   Now we’ll have to emote even louder so Patty can hear us in Swing Heaven, where I hope she’s bubbling like a fountain drink with LaVerne, Maxine, Bing; and backed by an angel band of Duke, Benny, Glenn, Satchmo and the Count.