A Tour to Remember 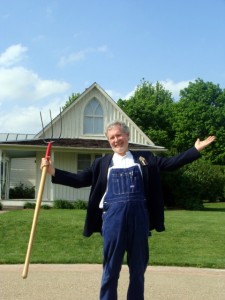 I recently finished my biggest author tour ever:  Seven days, sixteen programs and God knows how many chicken dance snapshots.  To borrow from Field of Dreams, it wasn’t heaven, but it was Iowa, and the subject of my book was the state’s native son and American Gothic painter Grant Wood.

I can’t remember a more enjoyable writer’s road trip, each stop was special in its own way:

–  Wilton, whose librarian, Shirley Roudybush Peterson, was a partner in crime from my high school class.

–  Burlington, where I strolled down Snake Alley, cited by Ripley’s Believe it or Not! as the world’s crookedest street.

–  Eldon, where I first performed in front of the famous American Gothic farmhouse, then enjoyed a beer in its living room.

–  Muscatine, where I was almost within shouting distance of the hospital where I was born.

–  Dubuque, Iowa’s oldest city, where I have performed so often.

A million thanks to my hosts and everybody else who moved bleachers, fetched extension cords, fed me lunch and in every way made these performances such a pleasure.

The tour was a personal stroll down Memory Lane as well.  My days usually ended yakking with my parents Dick and Grace Duggleby, who both put me up and put up with me most evenings.  I visited my grandparents Red and Peg Harter as well, beneath a sprawling oak tree at the family burial plot in Wilton.  These four people were the pillars that supported my “Wonder Years,” and when audiences applaud me, they’re actually paying tribute to my family.  It is to their unfailing love that I dedicate this extraordinary tour. 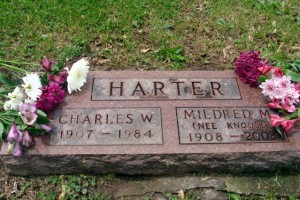