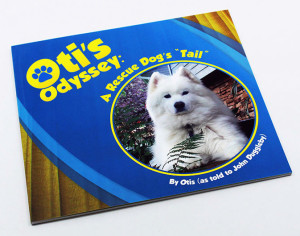 Otis the Samoyed of Destiny has been gone about a year now but his legend lives on– my new book Oti’s Odyssey: A Rescue Dog’s “Tail” has just arrived from the printer! This 36-page true story is a raggedy-paws to riches tale of rescue and redemption for kids of all ages, including those at heart.  If you’ve ever owned, rescued, fostered or just loved a dog, just try resisting this furball.

Copies are $15 including shipping anywhere in the U.S.  Signed copy? No problem!  Contact me@johnduggleby.com and I’ll get you one!

Thanks to everyone– especially supporters of my Kickstarter campaign– who helped make this tribute to animal rescue and fostering a reality! 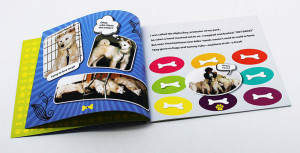 Not Your Grandfather’s– or Pete Seeger’s– Folk Music

I began my formal performing career at age 11 during the Hootenanny Craze of the 1960s.  I sang and banged percussion in a “baby Kingston Trio” as the opening act of hootenannies that straddled the Mississippi in Iowa and Illinois.  Pretty heady stuff at the time, though I now understand that it was because we were cute more […]

Who needs your name in lights when you can have it in chalk?  I’ve been a negligent blogger lately because I’ve been busy and happy playing farmers markets and other outdoor venues during this glorious, always too brief Cheeseland summer.  There have also been other distractions, like my daughter’s wedding 12 days ago.  My sets lately are heavy […]

There aren’t many people who are instantly tagged by their initials, but the King of the blues, B.B., is certainly one of them.  But it wasn’t always that way.  Slamming around in teenage garage bands in the Sixties, like most kids, I knew nothing about “real” blues– the kind played by black people before I was […]

Thanks so much (and a huge “AROOO!!” from Otis beyond the Rainbow Bridge) to everyone who pledged to my Kickstarter campaign to publish my book Oti’s Odyssey: A Rescue Dog’s “Tail” .  Because of overwhelming response and generosity, I can include more pages in the book, and print it in a larger format than I’d originally […]

No Fooling: I’ve Launched a Dog Book on Kickstarter!

Today may be April Fool’s Day, but I kid you not: I just launched a Kickstarter campaign to fund my new book, Oti’s Odyssey: A Rescue Dog’s “Tail.”   Otis along with his littermates and parents was abused neglected and left for dead—then dramatically rescued, fostered and adopted to my family to become a therapy dog, […]

Nominations for the 2015 Madison Area Music Awards—affectionately known as the MAMAS—are out, and yours truly has received nominations for eight songs from my 2014 album Better Late Than Never, in six categories.  I’m going for the gold (or whatever color their awards are) in the folk, country, pop, alternative, world and unique categories, and […]

My wife Jude and I just returned from a 19-day odyssey to Ecuador including the Galapagos Islands (as they’re known, though technically speaking, they’re an archipelago).  No words– even mine– can do justice to the jaw-dropping array of creatures we saw– as often as not, within arm’s length.  It is a Herculean (Darwinian?) task even […]

Thirteen holiday seasons ago I adopted a totally irresistible one-year-old pooch named Otis from the Northern Illinois Samoyed Assistance rescue group.  In the first of an endless stream of “fido-ops,” I put him on my holiday card that year.  This is the first Yuletide since 2000 that our home has not been […]